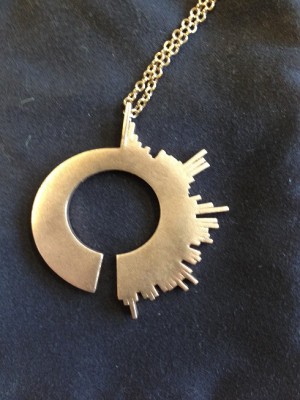 The director of City of Helsinki Urban Facts and the "mother" of HRI, Asta Manninen, retires on the 1.4.2015. HRI wants to thank Asta in the form of this pendant for her pioneering work towards openness and for the "birth" of the HRI open data service. This necklace pendant called "Avoimuuden aurinko" (tr. ~Openness Sun) represents her journey with the HRI service.

"The pendant is 3d-printed and cast from bronze and it represents Asta's remarking role as the director of City of Helsinki Urban Facts and her work for building a more open Helsinki during the years 2006-2015. The beams of the pendant represent the HRI open data service's monthly open dataset releases during the years 2010-2015. Due to the large variance in released open datasets, the length of the beams have been log transformed. The beams on the pendant start roughly half-way into Asta's reign, in the year 2010, when the HRI service was first launched. The City of Helsinki is committed to creating a more open city, so more beams are to be expected in the future."

The pendant was designed by coder Henri Kotkanen from the HRI-team.

There are no datasets in this showcase

Show all
comments powered by Disqus